The sky was blue. It was the kind of crisp, clear, blue-skied September morning that makes you want to get out of bed and start your day. We still talk about that blue sky sometimes--on certain Tuesday mornings when the air is just right and the sky reaches that perfect shade of cerulean, it brings back the memory of that day. I was underground when the first plane hit. On the A train on my way to work in Brooklyn. We probably rumbled along right beneath the twin towers, oblivious to what was happening on the streets above us at 8:46 am.

My sweater was red. Wrapped around the shoulders of a black and white dress that I had thrown on that morning as if it were any other day. After watching the first tower collapse on the television in my office, I walked out to the promenade on the Brooklyn waterfront known for its spectacular views of downtown Manhattan. 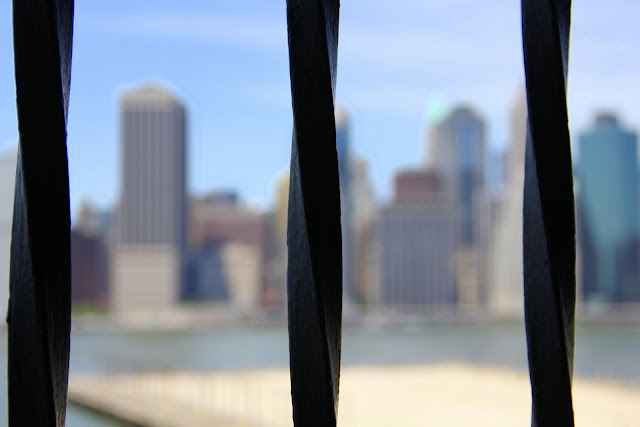 The sky was yellow. The familiar skyline on the other side of the East River was no longer there--literally hidden by the thick, smoky, acrid air that soon completely enveloped us all the way over in Brooklyn. Pieces of paper and ash danced through the sky landing in my hair, turning the shoulders of my red sweater temporarily gray. I stood motionless in this spot for several minutes, pressed up against the fence, staring out at nothingness.

Their bodies were white. People streaming across the Brooklyn Bridge, trying to get away from Manhattan were covered in soot and ash. They looked stunned, and scared. I worried about friends who worked in and around the towers. The rest is a blur of chaos, confusion, sadness, and fear.

I remember the subway the next day--it was unusually and stunningly quiet. Heads buried in newspapers, the horror of the previous day's events plastered on every front page. No one said a word as reality began to set in. The streets were splashed with flyers. Fences, lampposts, parking meters, building facades all covered with tape and paper, the faces of the missing staring out at me everyone I went. 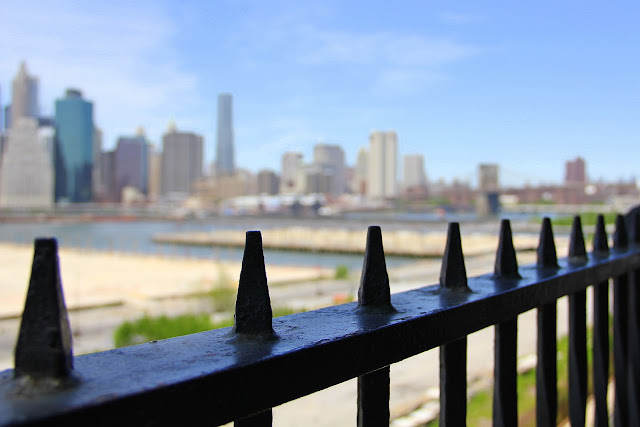 The days and weeks that followed were black with sadness. We worked 15+ hour days for months at the city's disaster response center. One broken family after another coming in to report the missing, tell their story, apply for assistance. We did everything we could; often times it wasn't enough. The response lasted several years and it was the most difficult but rewarding work I'll ever do.

After all the tears and despair, the colors slowly started to return to normal in our lives and in our great city. It's sometimes hard to believe that I met my husband during that time after 9/11 as we worked side by side in the relief effort. How such happiness could come from such tragedy is difficult for me to comprehend to this day. But we move forward accepting our fate--and hope that in celebrating those who died, we can also celebrate life.

These are just fragments of my 9/11 story--the words that I am able to get down. The events and emotions of those months and years stay with me always; words never seeming adequate to describe them. I have never written about it before, and I thank you for sharing this small part of it with me.

I didn't take one photo during that time. Not a single image taken by me exists to illustrate the ups and downs of those unimaginable days that followed 9/11. Sometimes I wish I had a few photos to document that unbearable but incredible time in my life, but most times I am glad not to have a physical reminder and I am satisfied with the pictures and memories etched forever in my mind.
Posted by urban muser at 7:32 AM

Beautifully written, wrenching recollections of that shocking day and its aftermath. Isn't it amazing that the human spirit and a nation brought to its knees can recover and find a way to go on?

Loved this piece. I've been debating for weeks whether I would publicly write about my own experiences. I was there, too. Yes, *that* blue. Every witness will remember that blue. Thanks.

well done. even so no photos but cetainly etched in our memories forever.

Beautiful words...you paint a picture with them, so really the photos are not necessary...

Beautiful images from today, and compelling words about your experience. Thank you for telling us your part of the story.

even we, far away, were deeply touched forever and your words today are beautiful and special.

Wow, this was beautiful. The images are fantastic, and your description really brings to mind how vividly sensory details like colors, smells, and textures can be permanently burned into our minds in these defining life changing moments.

What you wrote is very moving and poignant. Even after ten years it's hard for me to hear/read/see anything on 9/11. It brings back a flood of memories and tears. Thanks for writing about this.

That was so beautifully written. Thank you so much for sharing it with us. I'm so glad some happiness came out of all the sadness when you met your husband. I will always remember.

i can't imagine how difficult it would be to live through that and watch your city seem to unfold like that.

i love that you recognize that out of tragedy and pain came something wonderful... a blessing.

This is such a powerful post, Christy. Thank you so much for sharing your memories of that time.

So beautiful and poignant. Wonderful tribute. Thank you for sharing.

Although I left New York in 1998, I am proud to call myself a New Yorker. Your words are a great reminder.

beautifully written.. your words were enough! my heart, my thoughts and my prayers have continually been with you all over there through the years...

I told my husband that I didn't want to read or watch anything about that horrible day but I started reading your story in silence and the words started pouring from my mouth and I read your story out loud to my husband who listened in silence. Thank you for sharing your memories of such a tragic day.

This is really moving, thanks for sharing it.

This send chills down my back, my friend. A beautiful tribute and remembrance.

Very touching post, christy. Thank you for sharing it with us. NY is definitely in my heart today.

Such a beautiful tribute - your words help me see it. And having happiness come from the tragedy... just proof that they can't conquer us with violence.

Your words, your images. . . captivating.

Thank you for letting us have a glimpse of this experience from your eyes. I hope that, in a way, writing it was healing.

Touched... and speechless. Thank you

Such a thoughtful remembrance. Your words are touching and hopefully, even though it was surely painful, it helped to get it out. Warm thoughts to you and your resiliant city. -Angie

An unbelievably powerful piece, U.M... thank you so much for sharing this with everyone...

I am so happy that some love and happiness did come out of this tradgedy...it seems so symbolic. What a wonderful and touching post...thank you so much.

Oh, wow. Thank you so much for these words. Remembering with you.

It is not something that anyone can really imagine. My sister worked/works at the UN in NY, and I remember this day so well, but nothing like those directly affected, person living in NY at the time, or indeed any native New Yorker.

I can only imagine the grief that lingers for the people directly living, visiting, and working there that day.
Thank you for sharing.

So beautifully written. It gives me some comfort to know that from such a terrible time something truly wonderful evolved. Thank you for sharing your experience.

So beautifully written and expressed. Out of ashes, beauty rises.

I like your application of color. Thank you for sharing your recollections. xx

Such a powerfully written post -- Thank you for sharing your 9/11 story.

So glad I came back to read this - your words are so poignant. I felt your heart and soul...I can't even imagine having the experience you had. Thanks so much for recounting it.

This is a really beautiful post, and I thank you so much for sharing it here. As I read the details of what you remembered that morning, I too realized that I can probably tell you my every thought and movement as in disbelief, I watched on television, the second plane hit the South Tower.

We can rebuild. We can move on. But this will forever be a part of our lives.

Wow. I almost have no words for how this touched me. Your words simply pulled me right into those moments you saw. I was nowhere near ground zero when it happened, just terrible images on the television that ripped at my heart. I can't even begin to understand fully what it was like to be there. Thank you for sharing your beautiful words.

Beautifully written....a day none of us will ever forget but for those of you who lived and worked there I can only imagine how it changed the landscape of your heart. Thank you for sharing this small piece of your story.