It's crazy hot and humid in NYC today.  The temps are expected to rise to 103 degrees F!  It's been like this all week, not exactly great weather for any outdoor photo walks or street shooting.  So I spent some time on eBay and bought myself a really fun new toy.  And since it's so hot outside, I did a little indoor photo shoot this morning... 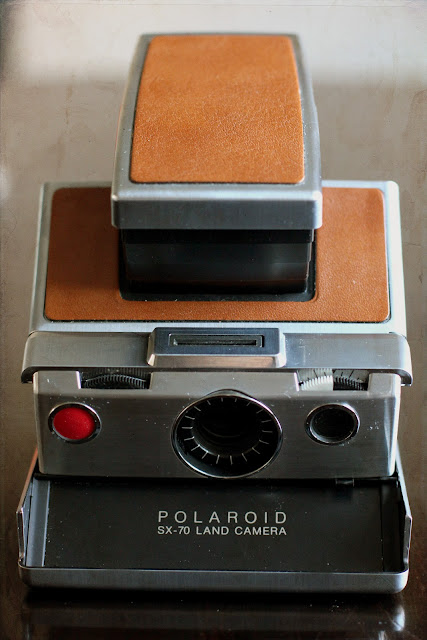 An original Polaroid SX-70 land camera.  These babies were made in the early 1970s.  Isn't she a peach? I have not film tested her yet, but she appears to be in really good condition.  I got a pretty good deal on it so it was worth the gamble to see if she actually works.  Lucky for me I live in NYC and we have the Impossible Project store downtown in SoHo... I am headed there today to test the camera and buy some film.  I won't let the heat keep me away! 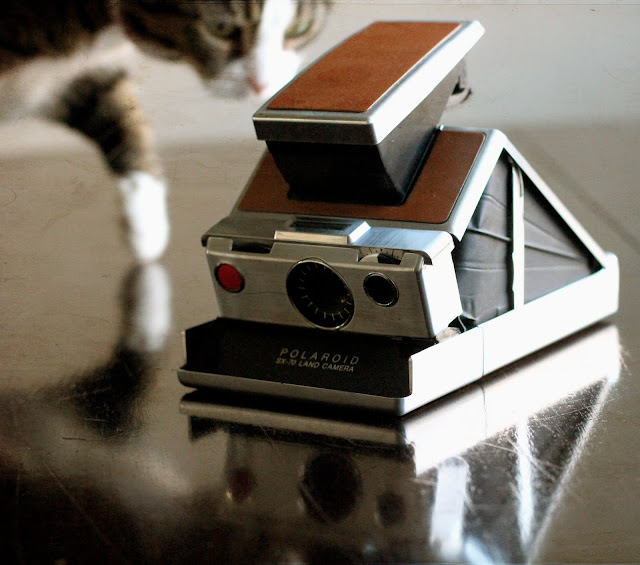 As you can see, The Cat is also pretty excited about my new purchase.  I can't seem to get her out of the way in my photos the last couple of days.  She did the same thing yesterday... I took this photo above to use in my announcement of our new theme, "two", over at Mortal Muses today.  If you want to join us, shoot your photo interpretations of "two" over the next two weeks and share them in our flickr pool.  Hope to see you there!  In the meantime, I'll hopefully be shooting some Polaroids.
{all textures by Kim Klassen}

How cool is that! Have fun with the camera! And love the texture in those last couple of photos. I'll pop in over at Mortal Muses and check out the new "two". Stay cool.

Have fun with that new camera! great shots and textures!

cool camera--I just got one too but an SX70 Sonar--love the wood colored leatherette of yours. Have a great time shooting with it!

Love your vintage camera! I bought the rainbow version on ebay recently because it's the same kind my parents used when I was little. Hope you have lots of fun with yours.

LOVE IT! Can't wait to see what will come of it - go get some film!

I personally feel a photo is not complete with a kitty in it.

Looking at your camera made me realize my grandma had one of these. Next time I'm in town I'm going to see if I can dig it up.

Oh I love the fact that your cat is in the photos . . . and I'm thinking now of the camera I had when I was a child. The kind of poloroid that you look down in, and wondering what happened to it!!

What a great find! I need to spend soem time on eBay. One of my 30 Before 30 items was to start a vintage camera collection. The months are closing in so I better get going!

Ooh! What a great find! I had a very brief relationship with some old vintage cameras. It's a long story, but I don't have them anymore...but I will always have the pictures I took with them. :)

tHis is Belgium said...

Oh she is wonderful! My mum just gave me hers from when I was kid! Excited to see photos. Mine are not so great.... Ahhhh gotta get more film!

I got my Impossible film and tried out my (construction) the yellow/black OneStep and eeeks! it worked, wasn't good but it worked, you probably know who my 'muse' was for the photo. Can't wait to see your first snaps!

Isn't the renewed interest in these cameras a hoot! I love it. I hope yours takes awesome photos.

Obviously, you are in the right place at the right time to own a Polaroid camera. How cool that you have a place to buy supplies for it. Funny for me to think of this camera as an antique, as I was around when Polaroids were first available. We sure had fun taking pictures. Alas, all those old photos have turned a funny reddish pink over the years.