I finally seem to be making a little progress on my Baby Surprise Jacket.  I haven't spent that much time on it in the last couple of days, but I have happily cruised into Stage 3 of the project.  I decided to use the kfb, k1, kfb increase and it looks ok so far.  In case I have not mentioned it before, I am following the "5 stages" of the BSJ as described in various KALs in the Ravelry "Baby Surprise Jacket Group":
So my gauge is off and it is coming out larger than I had hoped.  I didn't really have a size in mind as it's for a friend's baby, and it will fit eventually, right?  Anyway, I remind myself that this is the test drive BSJ and I WILL knit to the end and NOT rip out again.  Progress so far: 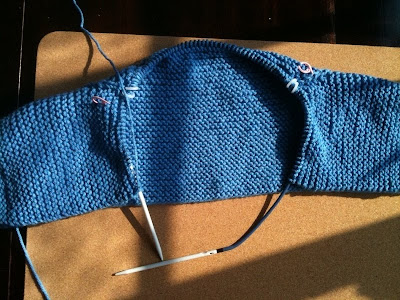 Good luck with the BSJ -- I've done 3 so far, all in Socks That Rock heavyweight. I've popped over to answer your question on my blog -- I got the cherry needle holder from Burgis Brook Alpacas, http://www.burgisbrookalpacas.com/needles.html.